Simplicity parenting, in many ways, is the antithesis of modern parenting. 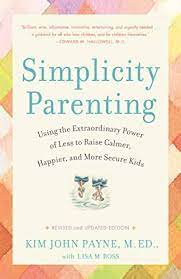 Simplicity parenting prioritizes a balanced schedule, predictable rhythm, and decluttered, information-filtered family environment, while most modern families rush from one activity to the next and live with crammed-full schedules in an information-soaked environment.

Kim John Payne, author of Simplicity Parenting: Using the Extraordinary Power of Less to Raise Calmer, Happier, and More Secure Kids, was an undergrad psychology student when he first noticed striking similarities in the behavior of PTSD-affected soldiers, teenagers who grew up in abusive homes, and children who lived in warzones. “They were nervous, jumpy, hyperactive, and overstretched,” Payne says. Their nervous systems were hyperactive and hyper-attuned to the environment.

In a few years, Payne began noticing similar behavior in children all over and surmised that there must be an “undeclared war on childhood,” as the kids exhibited all the signs of living in a war zone. But there were no battle lines, fronts, or bomb craters. Instead, these kids (and their families) lived quite ordinary lives. However, by that time, “overwhelmed family life had become the new normal.” And that new normal was not at all kid-friendly.

“It became more and more obvious that children, and especially boys, were living in a child-hostile environment,” he says. As a result, kids’ nervous systems were “out of whack” and many kids were (and are) in a near-constant state of fight-flight-freeze-or-flock. Kids (and boys especially) often reacted “as if their lives depended on it,” when they were asked to do something as simple as putting a coat on.

Simplicity is the Antidote to Overwhelm

He advises parents to “dial back” and simplify their lives, and the results have been remarkable.

“I can’t tell you how many parents have said, ‘I feel like I’ve gotten my boy back.'” Payne says. Many parents also notice that their boys are back to their “quirky selves.”

It’s not easy, however, to push back against the status quo. “The difficulty comes when we look around our neighborhoods,” Payne says. “There are so many parents that have normalized what is not normal for a child’s nervous system.” But deliberately simplifying your lives — cutting out extraneous extracurricular activities, limiting screen time and info exposure, and prioritizing play, family, and connections, can pay dividends.

“If we’ve built in time and balance in a boy’s life, and slowly built in time in nature, time with family, time with friends, that morphs into a strong inner loci” for the boy, Payne says. “As young men, they are much stronger and defined in who they are.”

Richard Louv on Animals, Nature, and Boys — ON BOYS episode