Doing more for boys and men does not require an abandonment of the ideal of gender equality. In fact, it is a natural extension of that. — Richard V. Reeves

Those words are from a new book Of Boys and Men: Why the Modern Male is Struggling, Why it Matters, and What to Do About It, by Richard V. Reeves, a fellow at the Brookings Institute, a public policy think tank based in D.C., and a father of three grown sons.

Boys and men (as a group) now fare worse than girls and women (as a group) in school and in the workplace. (In fact, the gender gap in college education is now wider than it was in the 1970s – but flipped, with far fewer males than females attending or graduating from college.) Males are also generally less healthy and die sooner than females. Yet these gender gaps aren’t often discussed and, to date, there’s been little action to address these concerning statistics.

“The gender inequality that Title IX was intended to tackle [in education] is now larger but completely flipped,” Reeves says. Also, many American men now earn less than many American women. White women, in fact, now out earn Black men.

Obviously, progress still needs to be made in terms of women’s rights. But we can’t continue to focus on girls and women and ignore the needs of boys and men. We must also address the issues affecting males. That’s how we work toward gender equality.

Given the fact that males typically develop more slowly than similarly-aged females, Reeves proposes redshirting boys, or having boys start kindergarten a year later than their female peers.

“The main reason girls are doing better in school than boys is because they mature much earlier than boys,” he says. At age 15, in fact, the average boy is developmentally two years behind the average 15-year-old girl.

The current educational system is better aligned with girls’ development. “The structural advantage in the educational system that treats 15- and 16-year old boys and girls as if they were the same is becoming apparent,” Reeves says. “We couldn’t see it before because sexism was holding girls down. Now that we’ve taken those barriers off, you’re seeing girls flying.”

Starting boys in formal education one year later would “level the playing field,” Reeve believes, particularly because a policy or proposal to start all boys a year later would extend the benefit of extra time to lower-income boys. (At present, many high income families do redshirt their sons. Private schools often recommend redshirting boys.)

Like so many parents of boys, Reeves assumed his sons were being deliberately lazy during their teen years. He’s since realized that, “This is neuroscience. These brain synapses need time to develop.”

HEAL jobs — those in the health, education, administration, and literacy/communication fields — are in great demand. Yet despite the fact that males are under-represented in these fields — and health and education, for instance, are facing critical staff shortages — there’s not yet been a concerted effort to encourage boys and young men to pursue these careers.

“We’re trying to solve labor shortages in healthcare and education with half the workforce,” he says. “I think we owe it to ourselves, and to our kids, to make a huge investment in helping get men into those growing jobs of the future.”

Continuing the ignore the struggles of boys and men is not a productive path forward.

“A lot of boys and men are really struggling. That’s because of structural changes that are happening around them; it’s not because there’s something wrong with them,” Reeves says. “As a responsible society, we should address those challenges because if we don’t, they’re fester. If we don’t address them, it won’t end well. We need now to apply the spirit of liberation to boys and men too.” 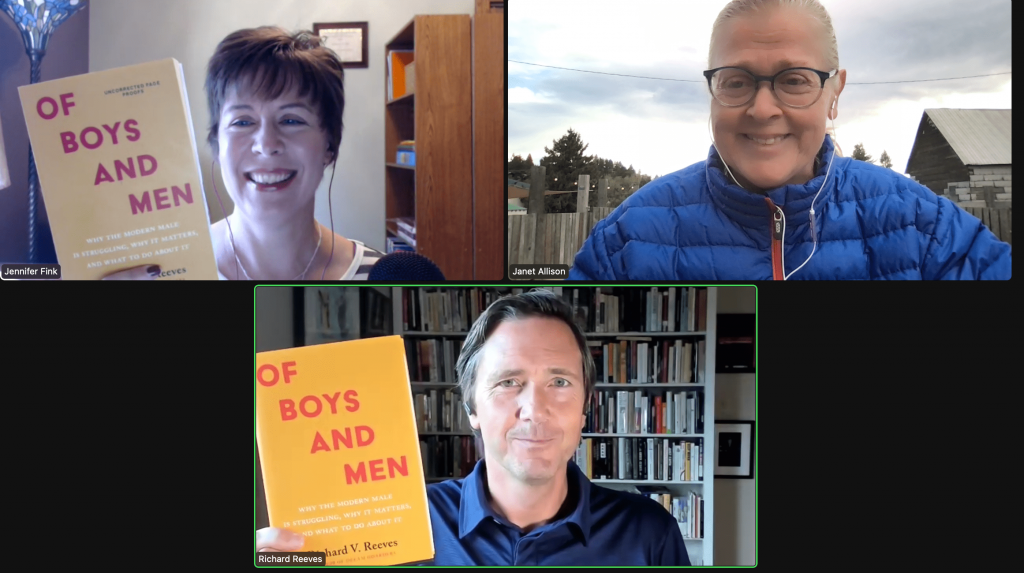 Of Boys and Men: Why the Modern Male is Struggling, Why it Matters, and What to Do About It — Richard’s book

The Boys and Men Project — a project of the Brookings Institution